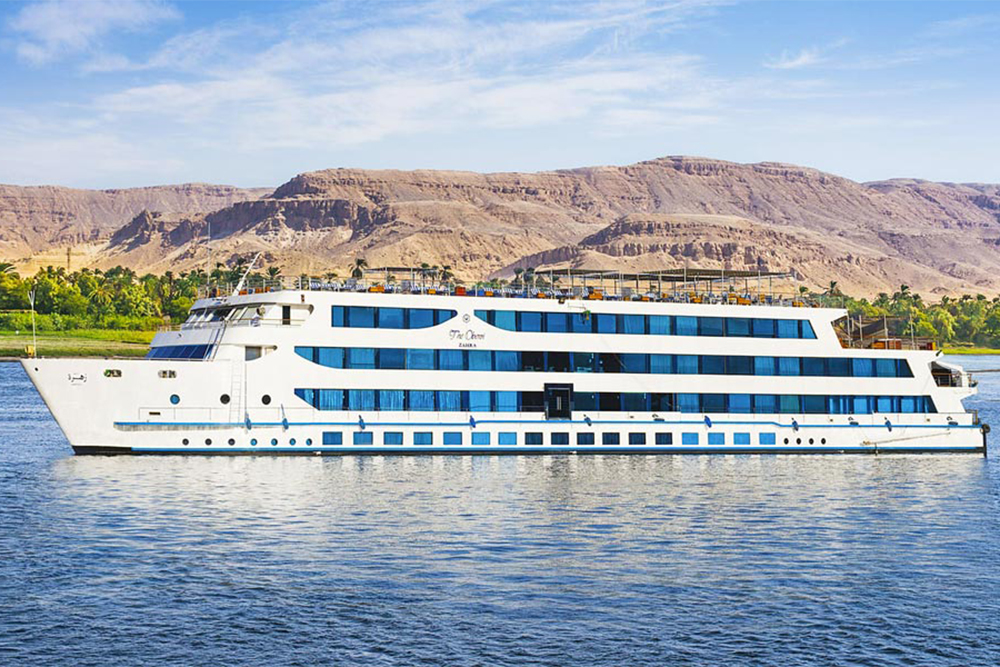 Spend a pleasant time navigating the Nile from Luxor to Aswan and enjoy your unforgettable vacation with Nefertari Nile Tours that gives you the opportunity to explore the Spectacular history of Ancient Egypt.

The prices mentioned per cabin in US dollars ($)

500 USD For A Single Person

It can be one of the following or something similar

At 10:00 am Pick up by our local representatives from your hotel in Luxor or From Luxor airport and then transfer to the Nile cruise. Boarding before lunch. (Lunch on board).

then Visit  the Temple of Luxor  , which was built during the New Kingdom. It was linked to the temple of Karnak by an avenue (dromos) flanked by sphinxes that is almost buried its great part under modern buildings. That temple was built by two pharaohs, Amenhotep III (built the inner area) and Ramses II (finished the temple).

Visit to the Temple of Karnak , it was the most influential spiritual and religious center in ancient Egypt especially during the New Kingdom. The main temple was dedicated to the worship of the god Amun, but as in other Egyptian temples other deities were also venerated. Starting from the Avenue of the Sphinxes visit the unfinished papillon, the hypostyle hall, with its 134 gigantic columns, the obelisks of Queen Hatshepsut and Tutomosis III. The temple of Amon adorned with lotus designs and the papyrus, the Granite Scarabajode Amenophis III and the Sacred Lake.

Afternoon tea. Dinner on board and belly dance show. Accommodation in Luxor.

Breakfast on board then visit  the West Bank,  to visit the Valley of the Kings, the Temple of Hatshepsut and the Colossi of Memnon.  The Valley of the Kings  was the place, during the New Kingdom, where the pharaohs were buried in hypogea. Here the kings of the 18th, 19th and 20th dynasties were buried, as well as some queens, princes, nobles and even animals. Visit to the Temple of Hatshepsut, the unique temple of Queen Hatshepsut (18th dynasty), the most monumental of those built in the valley and the only one of its kind in all of Egypt. Visit to the Colossi of Memnon.

Breakfast on board. Visit the Temple of Horus in Edfu . Navigation to Kom Ombo. Lunch on board.  Visit the temple of Kom Ombo  shared by the two gods Sobek and Haroeris in Kom Ombo. Afternoon tea. Dinner on board and Galabya ​​party. Accommodation in Kom Ombo.

Breakfast on board and sailing to  Aswan  arrival Aswan then visit  the Great Dam , the granite quarries and the Temple of Philae. Lunch on board. Sail on the Nile

by felucca around Kitchener Island and AghaKhan Mausoleum. Afternoon tea.

Dinner on board. Accommodation in Aswan.

Breakfast on board. Disembark and transfer to Aswan airport

(Optional not included)  Tour to Abu Simbel to visit the  Temple of Abu Simbel de Ramses ll , the colossal temple of Abu Simbel built by Ramses II (XIX century. Dynasty) and lately saved from the flood of the waters of the Nile in the middle of the glories of ancient Egyptian monuments. The temples were built on a cliff of sandstone rock, and the representation of the deities to which each was dedicated is carved on its massive façade. Nearby, they are also kept, is the small temple of the king’s wife (Nefertari), dedicated to the goddess Hathor.

Register now! We will send you best offers for your trip.